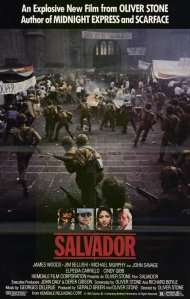 Hey take some pictures, fresh bodies up there.

Oliver Stone?has become a byword for highly charged politics, particularly left-wing, with a flexible relationship with accuracy. ?Many–dare I say “most”–find this lack of candor to be a fatal flaw. ?“Why,” say?the critics, “bother making films about real people and real situations when you aren’t going to represent them honestly?” ?Surely Stone believes that he is telling the truth, or (at least) “a truth”, but perhaps?rigid adherence to the almanac is not important. ?Salvador?(1986), written with and about journalist Rick Boyle?and his experiences in El Salvador, is perhaps the best example of a film that is more important as a sketch than it is a recreation of historical events. ?It’s a potent cautionary tale when seen?in the light of current events where American military support is provided to new groups?and some of the same old, nasty faces. ?Apart from anything else, it is probably Stone’s best political film.

It’s 1980 and Ronald Reagan is on his way to the White House. ?But Richard Boyle (James Woods) has problems of his own. ?He’s being evicted and, on the way to getting one last lifeline in the form of a press pass, he gets arrested?for driving without a license (among many other accumulated offences). ?His buddy Doc (James Belushi) bails him out because?he?needs a place to stay. ?Down and out, Boyle recommends going to Guatemala and Doc is convinced. ?Next thing Doc knows, Boyle has driven them to El Salvador so that he can (possibly) put together a story and be a working journalist again. ?El Salvador ain’t a very nice place. ?People are shot if they don’t have their papers, natives and opposition “communists” are killed by the truck load, and the American military-intelligence community are on the side of the thugs. ?Boyle meets up with his girlfriend Maria (Elpidia Carrillo) for a little bit of latin love and a respected Newsweek photographer John Cassaday (John Savage) for some journalistic backup. ?The hot-blooded, hot-headed Boyle stirs the pot, upsets a lot of people, and faces the likely event of a bullet in the head with only his press badge, a white towel, and a handful of watches for protection.

In terms of technique, this isn’t a perfect movie. ?Much of the middle part of the film is basically a series of vignettes. ?Boyle isn’t so much chasing the story as running around looking for pictures?of death. ?Nobody cares about El Salvador, but a terrible picture might justify some column inches to explain where it was taken. ?So, there can’t really be a single (journalist’s) story to hang the film on. ?Instead, Stone paints a picture of El Salvador and it isn’t pretty. ?Everyone is inches from death with Boyle’s scurrying to find an angle. ?He’ll bribe, he’ll chide, he’ll do what he can before his natural antagonism comes out and puts him right back in danger again. ?Again, this isn’t important, what’s important is how the bribes are made, why their made, and how futile all that scurrying is or can be.

In light of our own difficult posture in Syria, Ukraine, Egypt, and most other places,?Salvador?is a film desperately in need of a revival. ?A conversation towards the end of the film between Boyle and (essentially) the CIA and US military must have struck many at the time as painfully contrived and on-the-nose. ?It’s Stone and (screenwriter) Boyle’s chance to lecture the powers-that-be on their?dangerous ignorance and the folly of their ways. ?The way things shook out, you’d have to be brazenly partisan to deny the fact that Stone/Boyle was?absolutely correct and the establishment pathetically delusional. ?The feared revolutionary governments being tenfold worse than these brutal gangsters is a sick joke. ?El Salvador, as described in this film, was hell. ?It couldn’t get much worse. ?Reports from Syria describe a scene?even worse with its revolutionaries even more feared than were the communists. ?I’m not suggesting a direct parallel or way forward, but struggling with the situation in this film should clarify our thinking.

Salvador?opens itself up to claims of being mostly one-sided. ?There is only?one scene in which the revolutionaries are shown to be anything other than the victims out of an old western. ?The scene is just a pill to swallow, but it is well-placed. ?No one will leave this film without remembering it as an effective muddying of the moral waters. ?More could be said about the varied politics of the opposition and?such, but that’s another film. ?Stone also denies any possible involvement of outside communist countries. ?The military man, too, is an absolute caricature of a right-wing nut who goes so far as to blame Boyle’s lefty pals for losing the Vietnam War. ?But there is the Ambassador to El Salvador (Michael Murphy) who is, at least,?morally centered about the whole thing?(though still a upper middle class bureaucrat).

Salvador?is an effective film and, despite some sloppiness in the characters, well made. ?The camerawork is?thrilling and evocative. ?James Woods is good, James Belushi is?one of the worst line readers I’ve ever seen, and?I was very sad when that nun (Cynthia Gibb) got killed. ?But, for the last time, this?movie is about instilling an impression and guiding your instincts away from simplicity, complicity, and trust in institutions. ?Whether Stone was accurate with this particular story and the ins and outs of American involvement therein, is completely overwhelmed by the similarity his vision has to our current foreign policy dilemmas. ?If you think you fully understand what’s going on somewhere, you’re probably wrong. ?We see that every time the foreign news story we thought?we had a handle on turns around and shows us that the team we were rooting for are actually maniacs.? How we overcome that ignorance without being confounded by the complexity and impossibility of being at all certain?will require idealism. ?But that’s what America is really good at.

The score was by?Georges Delerue, though you wouldn’t really have noticed.

Mentioned in this review…(paid links)