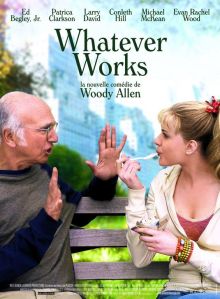 Let me tell you right off, I’m not a?likable?guy.

Woody Allen has this thing for old men being teachers to young, impressionable, slightly dimwitted beauties. ?What is that? ?Is there some kind of impulse in some people to take on this role? ?Me, I like to share, not instruct. ?Different strokes.

Whatever Works (2009) follows the story of Boris?(Larry David) who is a genius and misanthrope. ?I think he has some confusion as to his relation with the Nobel Prize, but that might be my memory. ?Melody (Evan Rachel Wood) is the young beauty I referred to. ?She’s very dumb and impressionable. ?She takes on all the sad, nihilistic crap that Boris tosses around and comes to love him. ?They get married. ?Then her mother, Marietta (Patricia Clarkson), comes to town. ?She doesn’t think much of Boris, but she is introduced to people that change her life dramatically. ?She still doesn’t like Boris. ?She tries to set her daughter up with Randy?(Henry Cavill), an actor who falls in love with Melody.

I’m coming to the conclusion that what separates Woody Allen movies is the level of performance from actors. The direction and sounds will all be roughly the same, but whether the actors are just phoning in the performance or really trying to portray a person will decide things. This movie is pretty weak in the performance department.

I’m pretty sure Larry David doesn’t see himself as an actor, but rather as a comedian. To me, he’s always just a rough-hewn stand up who says “seriously?” and, “really?” very convincingly. He doesn’t really pull anything out here to change that image. His frequent monologues to camera run from the chuckle funny to the dreadfully read aloud. It isn’t the fault of the material as it was in Melinda and Melinda?(2004), this is mostly on Larry.

Here, the woody talk is on pretty open display when he writes for dumb hicks. I think he’d be surprised what words they don’t know or wouldn’t have to hand in regular conversation.

As for the beautiful Ms. Wood, she appeared to get all of her technique from the Anna Paquin School of Southern Performing Arts. In fact, after I noticed the similarity, all I saw was Paquin. I may not think much of Paquin, I hold out more hope for Wood. ?Except for the absurdly manic gesticulation, I’d say she gave a pretty good turn as this very stupid person. Mission: ?Accomplished.

Allen’s dialogue is as funny as usual, but no more. What distinguishes this movie from the others is message. ?He constructs a story that actually enforces his message, if only in the last thirty minutes. Not too shabby. Some movies run around like mad, literally, to pull a message out of a hat in the last minute. Here, he sets it up from the start and goes about showing us how it coheres with our own judgment by the end of things. ?Something that he utterly failed to do in Melinda and Melinda. The message in this movie is “whatever works”. In this crazy world, you just have to find what works to help you get through it and that’s more than enough to be going on with.

Overall, this is well entrenched in the middle of Allen’s work overall. With a better performance from Larry and less arm action, who knows? Okay, I’ll say it, it only kinda worked. 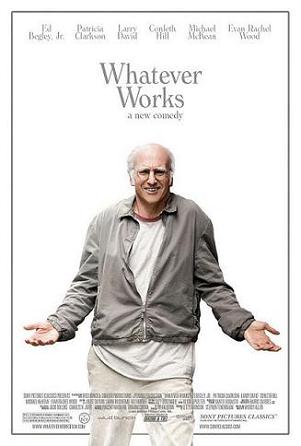 As a final thought–dvd cover. ?The US cover/poster makes the movie look like a filmed stand-up gig. ?I’d seen it many places and never even knew that it was a Woody Allen movie. ?That’s bad. ?The whole idea of this movie is Woody and Larry coming together and I didn’t see that. ?The French poster I used as the featured image does convey that message. ?Old man clearly pontificating in front of a beautiful young woman. ?It must be Woody Allen.