You may be aware that I am more than a little fond of British film and television. ?Like a fair number, I was raised watching PBS on the weekends. ?Unlike a fair number, our house did not allow any other viewing for many years. ?That meant that I was learning comedy from Rowan Atkinson rather than TGIF. ?So, when I refer to “British Comedy,” I am almost always referring to its manifestation on the screen. ?Perhaps later I’ll venture into literature, but for now I’ll stick with that which I have far greater literacy.

So, now you’ve heard about this thing called British Comedy. ?You probably have some ideas of what it consists already. ?It’s dry, witty, with notes of Elgar, and a bulbous nose. ?Maybe you think that’s the comedy you want and love. ?Maybe you think it’s not really your thing. ?The latter of you just want something that’s, “you know, funny.” ?This guide is for you latter fellas too, though your lack of faith disturbs me. ?Comedy, after all, is comedy and it’s funny by definition, though it may only be comedy to other people. ?But put that idea that British-Comedy-is-for-other-people on the shelf, or to one side, or wherever you can keep it out of the way without getting it wet.

When approaching a British Comedy, you’re best hope for survival is to keep your brain as limber as possible. ?Let’s do some exercises. ?“A mistress is something between a mister and a?mattress.” ?(Stephen Fry.) ?Feel good? ?How about another? ?“How do they separate the men from the boys in the Navy?” ?“With a crowbar.” ?Okay, here’s one from Jimmy Carr. ?“Why did the lion get lost?” ?A double-joke there and it only has one meaning. 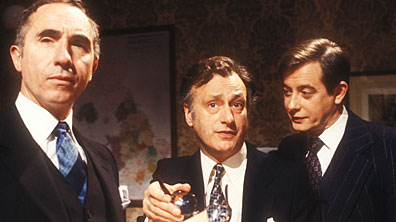 The pun is probably what people mean by “dry.” ?A pun is best served dead pan or in earnest. ?It won’t be served to you on a plate, but it will often be accompanied with a live audience’s laughter if you’re watching a SitCom–use it, it will guide you well. ?Laugh when they do and you won’t go far wrong. ?Because a pun usually takes a moment or two to settle in, especially if you aren’t used to them, it can make you feel stupid if you don’t catch it. ?Then, the audience mocks you with their lightening-quick responses.

The trick is not to take it as a statement of your intelligence, but rather a verbal exercise that you’re not used to. ?A pun works on word association, sometimes two meanings (ambiguity) or the same sound but a different word (homophones). ?I mean, my dad doesn’t like Ellen Degeneres’s?comedy, but I just think he’s a homophone. ?That’s a malapropism, where they sound?roughly?the same as the “correct” word, but are not truly homophonic. ?Again, it’s all about association.

The laughing audience will also help you with the frequent allusions. ?This is, in many ways, the biggest difficulty in British Comedy because a pop reference can be both dated and outside your knowledge. ?Who the hell is Michael Foot?and are we laughing because he has these mentioned qualities or the inverse? ?That’s the other element of dryness: sarcasm. ?Some people are worth looking into to unpack the joke as you’ll be hearing about them again and again. ?Others, you’re better just letting pass you by. ?I’ll tell you this much, Prince Phillip most definitely is worth researching.

Accent is obviously something that we need to talk about. ?For such a small area of land, there are a plethora of accents and dialects. ?For some, this is very difficult to overcome. ?Since most of the comedy is very much about the words, this can be a fatal handicap. ?I would class myself as above-average in accent comprehension and sometimes I find it incomprehensible. ?Especially the Scots. ?Sometimes, that’s the joke, so the stranger the accent, know that you are probably supposed to struggle. ?That’s a little too demanding, it may seem, but over time you’ll get better at it.

An accent tells you where the character comes from, their class (a major?preoccupation?in the UK), their probable intelligence, and maybe even their philosophy on life. ?Thus, a great deal of comedy will be derived from either fulfilling those expectations or turning them around. ?For Americans, and I include myself in that category, the accents themselves have a charming comic flavor to them. ?That’s probably true of most accents foreign and domestic and even the UKers seem to like them in that way–even when it’s their own accent, which is confusing.

You will find the pun as well as what you’d call broader comedy. ?There is a modern trend towards extreme awkwardness and brutal directness, but I think this is probably shared by American comics. ?The only difference is, perhaps, the things that make us uncomfortable and the lengths to which we will allow it to continue without relief. ?If you’ve seen a Gervais-penned Christmas special, you will know that they can allow 45 minutes of unadulteratd awkwardness to continue until one giant, fist-pumping climax. ?That’s pumping your fist into the air in support or joy, not…anyway.

You’ll also find humanity as a common theme. ?Characters are always imperfect in ways that I find endearing. ?They may be bad with the ladies. ?They may have trouble with the boys. ?They may be a little thick (that is, stupid). ?Most of the time, they are in positions of inferiority and are put upon by some higher power. ?British Comedy relies on observational humor and to observe humanity is to observe inferiority. ?With the British, self-deprecation?something of a national pastime. ?Along with?queuing?and moaning (complaining)–that’s their self-perception.

What also marks British Comedy is the free blending of tragic moments. ?People may die, dreams may be dashed, or other serious problems may crop up. ?This will fit into the comedy as neatly as it does in life. ?This is also what makes British Comedy far better on a consistent basis than you might find in American Comedy. ?There have been great strides into this blending, known here as the Dramedy, but generally approaches it from the opposite angle. ?That is, a dramatic series is conceived and humor is liberally applied to shape out the characters and story. ?For British Comedy, the comedy is the focus, but it grows out of tragedy like mushrooms from crap–except I don’t like mushrooms, so the simile has failed.

Despite common themes and techniques, the spectrum of BritComs is far wider, I think, than our own in the US. ?Sometimes just within a single show. ?One show may scrape the sky with incredibly high language with a cast of three middle-aged men in a single room while another show may plumb the depths of fart jokes and homophobia you’ll find on Fox any given weekday night. ?Given their laxness in allowing sex and foul language on TV gives them, if anything, a fuller palette with which to paint. ?So, for those who say it “isn’t for them” are talking full-blown nonsense.

Comrades, go to your DVD player, find its model number and find out how to hack the region out of it. ?This isn’t the kind of movie hacking where they pull up that extra screen and start typing wild code to fight or install computer viruses or anything like that. ?It’ll just have you pull out the remote and do some random button pressing that will actually take you to a weird screen and change the settings to “Region 0” or Region Free, same difference.

It does nothing to the effectiveness of the player and is not, as far as I am aware, in any way illegal or affecting of copyrights. ?The regions do not require different readers or hardware, it really is just a built-on limitation only relevant to what DVDs are generally available in the region where you live.

If you need one, Amazon sells a Philips 1080p/HDMI with upscaling?and the comments tell you how to de-regionalize it. ?I’m not totally sold on upscaling, especially for older movies, but if you’re buying a dvd player that doesn’t have an HDMI hookup, I feel like you’re just asking to be obsolesced. ?Holy God, it’s a word.

In enlightening your DVD player, a world opens before you. No, not the maw of the hell-mouth. ?It is glorious Albion with its?wondrous?DVD collections at surprisingly reasonable prices. ?What you will then have is competition for your TV/Movie-buying dollar (converted into pounds). ?But far and away it’s greatest benefit is in the titles you will find in normal production. ?If you use Amazon.com–which is sensible enough–you might find British titles, but their inventory will not give the beneficial guidance of its “People who bought this…” device that you enjoy in other situations. ?No, but there is Amazon.co.uk!

Act, comrades! ?Your DVD player has nothing to lose but its chains! ?You have a world to win. ?BritCom fanatics of the world unite!

1 Response to British Comedy: A Guide (Part I: Introduction)